I’ve just come back from a 2-day Barn Hunt trial in PA. What a great way to spend July 4th weekend!  An Agility friend recommended that I give this new-ish organized dog sport that welcomes all breeds of all ages. From her descriptions, I expected to have a lot of fun with my 3 dogs and learn a lot during our first try at this instinct-driven sport. 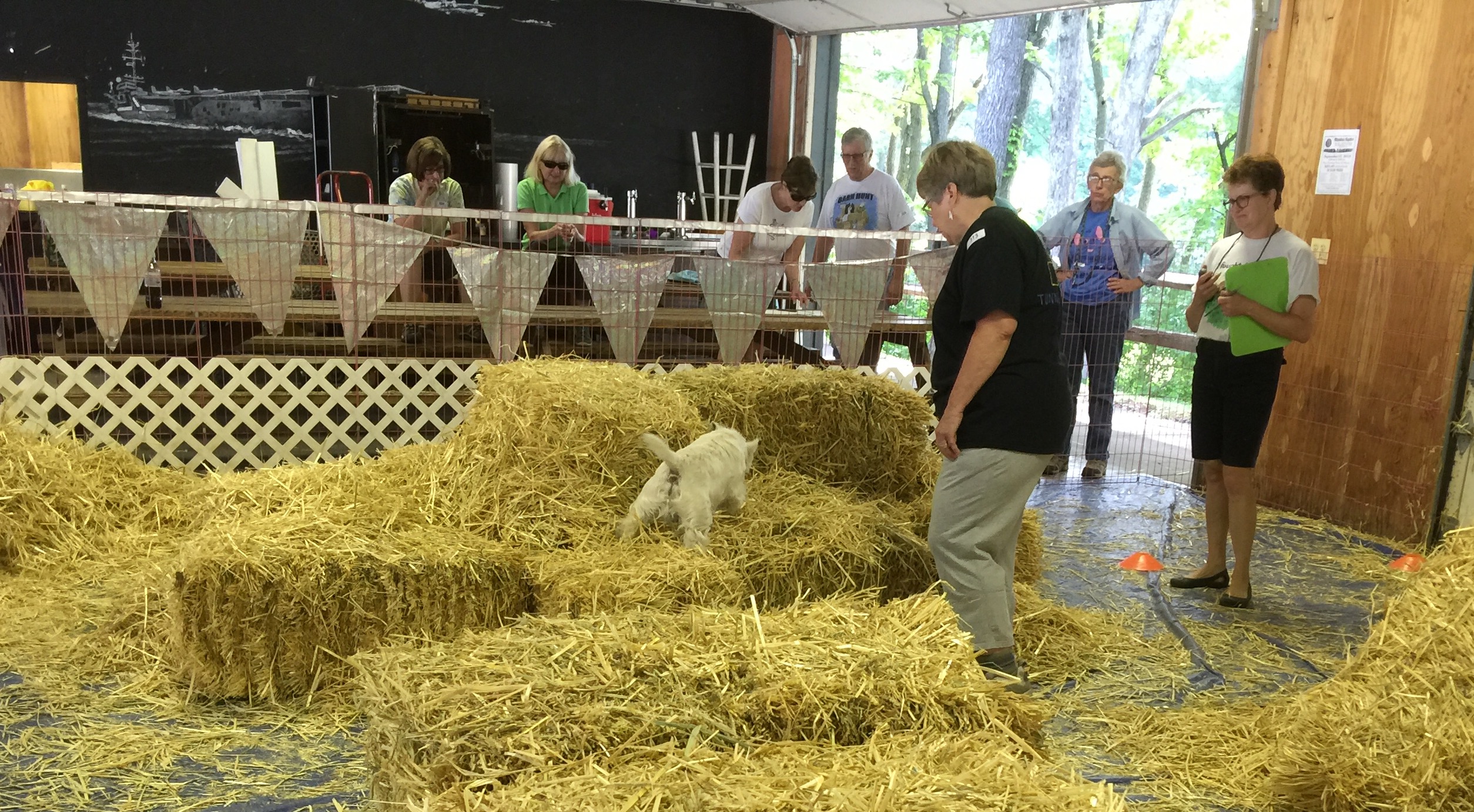 Here a Westie, there a Westie - Barn Hunt is especially popular with Terriers.

Trig, Flop, Jambo and I arrived bright and early to the trial site on Sunday morning. I had sent in my dogs’ registration and entry forms for the event via the very well-organized BarnHunt.com (which also has Judge’s Briefing rules; I was happy I’d read these before playing.) As per the requirement, I had registered them all for the Instinct Test which is usually held first thing in the morning, in a separate ring from the advanced level dogs.  Our ring was for the beginner / “Novice” level dogs - when I checked in, I saw that three tubes had been laid out in the ring in preparation for the Instinct portion of the test. Each dog starting out with Barn Hunt needs to pass this first test -  identifying which of the 3 tubes placed side by side in the ring contains the live rat to such an unmistakable degree that his handler could triumphantly shout, “Rat!”.

A quick word about the happiness and well-being of the rats, which was of concern to me until I learned more about how they were handled. There was no way that the rats employed by this trial were ever going to be in harm's way. It turned out that the rats at this trial were the pets of one of the judges, and she was very happy to talk to me about them. Far from being traumatized, the rate were kept in a separate area, away from passing dogs, during their “down time” at the trial and had a lovely array of snacks and treats available to them. They readily climbed into the hands of their Mama for cuddles and skritches.  As you can see from the picture, the tubes that the rats hang out in during the trials are more than secure.  The Barn Hunt rule book has very specific rules about the handling of the rats and I witnessed them being handled with the utmost care and respect at the trial.

Scratch and sniff...Which one has the rat?

When it became time to compete, I expected to see a “running order” of the dogs just as Agility trials provide. Unlike other trials, each level of dogs entered here (in Novice, Open, Senior, and Master) were separated into groups, called “Blinds.”  This helped people like me who had entered multiple dogs in the same level, allowing me to have time to return to my car, get my next dog, and get back in line.   All the same, there were only a very few minutes in between finding out which of your dogs was going to be tested and needing to get to your blind group to be ready when called.

I hurried to get my oldest dog ready so that he could have ample time to potty before entering the ring. The activity of sniffing and searching can often lead to leg-lifting, a sure way to be dismissed from the competition ring!  Flop and I then made our way to the side of the building to join the other 3 dogs in our blind.  When Flop’s name was called, we entered the ring and stood in the “Box” - an un-leashing area at the entrance, marked off by orange cones - until the judge said “You may go when ready!”. In the ring were bales of hay configured so that the dog could easily climb them and go through the tunnel that was formed in between the bales. Both a climb and a tunnel are required of the dog competing at Novice level (and up) but in Instinct, this isn't necessary. Of course, what Flop was most interested in were the tubes! He went over to them right away - then, upon inspecting them, he got very still. His tail started to go up and he stood right over one of the tubes. This seemed auspicious to me, so I asked the judge if I could call it.  She laughed and said, “You can’t ask me, you have to say it!” So I declared, “Rat!” and - jubilation! - Flop earned his Instinct title right then and there.

Jambo’s experience was much the same, though she began by jumping up to try to make friends with the ring assistant and the judge. When that didn't work (they ignored her), she sniffed her way all around the ring area, which was securely closed on all sides, and it was fascinating to watch her signals when she had found her rat. Ears pricked, she tilted her head back and forth as she sniffed the tube. “Rat!”, said I - correctly, as it turned out - and Jambo and I were thus ready to move onward to Novice level later that day.

Masters level searching at the trial

Trigger, my 10 year old dog, was next to try her hand at finding her quarry. She came into the ring, took a look at all the hay, and immediately began to roll in it….and roll, and roll some more. Perhaps she was a bit stressed by the atmosphere, and perhaps she wasn’t interested - in any case, after giving her time to look around, I didn’t feel right in being pushy to her during this first try.  And so we exited the ring, trailing several long strands of straw along with us.  I wasn’t concerned as Trig was entered in Instinct on both days that we attended so she had another chance. Of all my dogs, I felt that Trigger had the strongest hunting instinct.  What a surprise I had in store for me!  During her second try at Instinct, I asked Trigger to come along with me to pre-empt her rolling, happily encouraged her over to the waiting tubes, and pointed towards one. Trigger leaned in to have a sniff….and an expression of such intense, unmistakable dislike unfolded across her face that the ring crew and I all began to laugh. So much for my great hunter - in any case, Trigger loved the trails and park that we hiked in after the trial, which was just fine for all of us.

As I complete this blog post, I’m also filling out my entry forms for another local “Fun Test” to go to at the end of the month.  My 2 dogs that appear to love this activity will teach me more about being a good observer of their indicating behaviors.  This is what will keep me and many others coming back for another chance to climb hay bales, sniff around, and “Rat!” and enjoy this fabulous sport with our dogs.

Visit BarnHunt.com for more info about local events and "Fun Tests." All breeds of dogs are allowed to play.

Misa Martin is a Certified Professional Dog Trainer. Years of attending agility seminars, workshops, seminars and camps with her first dog led to the beginning of her professional dog training career as a PetSmart Trainer in 2008. In addition to joining Port Chester Obedience Training Club's Family Manners program, Misa is a staff trainer at the Mount Vernon Humane Society, and a volunteer trainer for Waggytail Rescue and the Walden Humane Society's education program. Misa owns Hudson Valley Dog Trainer, providing reward-based training to private clients. Through her knowledge, experience, and sense of humor, Misa encourages students to approach dog training as a team effort, where students learn as much from their dogs as dogs learn from their "parents," making training fun for humans and dogs alike! Misa can be reached at [email protected]