How Well Can Dogs See? 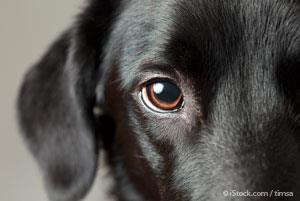 How Well Can Dogs See?Dogs are famous for their sense of smell, and of course, they're also well-known for the sharpness of their hearing. With these two powerful senses, dogs can detect many things a lot sooner than humans can — if we can even detect them at all. But knowing how strong a dog's other senses are, you may wonder: what is a dog's eyesight like? Understanding how your dog sees the world can help you figure out some things about his or her behavior.
How Dogs See the World
Most people know dogs have a degree of colorblindness, but it's incorrect to believe dogs can only see in black and white. A 2013 Russian study proved that dogs see various tones of yellow and blue. Red objects show up not in gray but in a different shade of yellow. This is because dogs have fewer color-receptor cells, called cone cells, in their eyes than humans do — their "red" receptors are the same as their "yellow" receptors.
Dogs' limited color vision isn't the only difference between their eyes and ours. Although it varies among breeds, dogs usually have much blurrier vision than we do — but they have a significant advantage in low light, and they can spot movement much quicker than we can, both traits that hearken back to their history as predators.
If you want to get a sample of what your dog sees, you can upload a photo to the Dog Vision tool. The tool processes your image and displays it the way your dog would see it. It can't be guaranteed 100% accurate, but it's pretty close!
How Dogs' Vision Impacts their Behavior
When you understand the different way your dog's eyes work, it might explain some common instances of your dog not seeming to recognize you. Of course, your dog still smells you, but when things look different but smell the same, reality doesn't match up. This is why some dogs bark when a person is wearing a hat or large coat, even a person the dog is very familiar with, like a family member.
This is also why dogs can get confused when you hold a camera to your face — your head has been replaced by a dark blob! Their eyes simply don't have the precision to immediately recognize that your hat, camera, or coat are separate objects from your body. Your dog can get used to seeing these things, though, and eventually not be bothered by them.
More about Dogs
If you want to learn more about your best friend (and who doesn't!), check out some of our other blog posts. And if you want to spend more quality time together with your pup, Five Barking Dogs! has tons of supplies for positive dog training, traveling with your dog, some of the best dog toys, dog agility training equipment, and more. Take a look and you're sure to find something you and your pooch will love.
Information
Browse By Category
Browse By Price
Top Sellers
New Releases
Browse by Price
Quick View