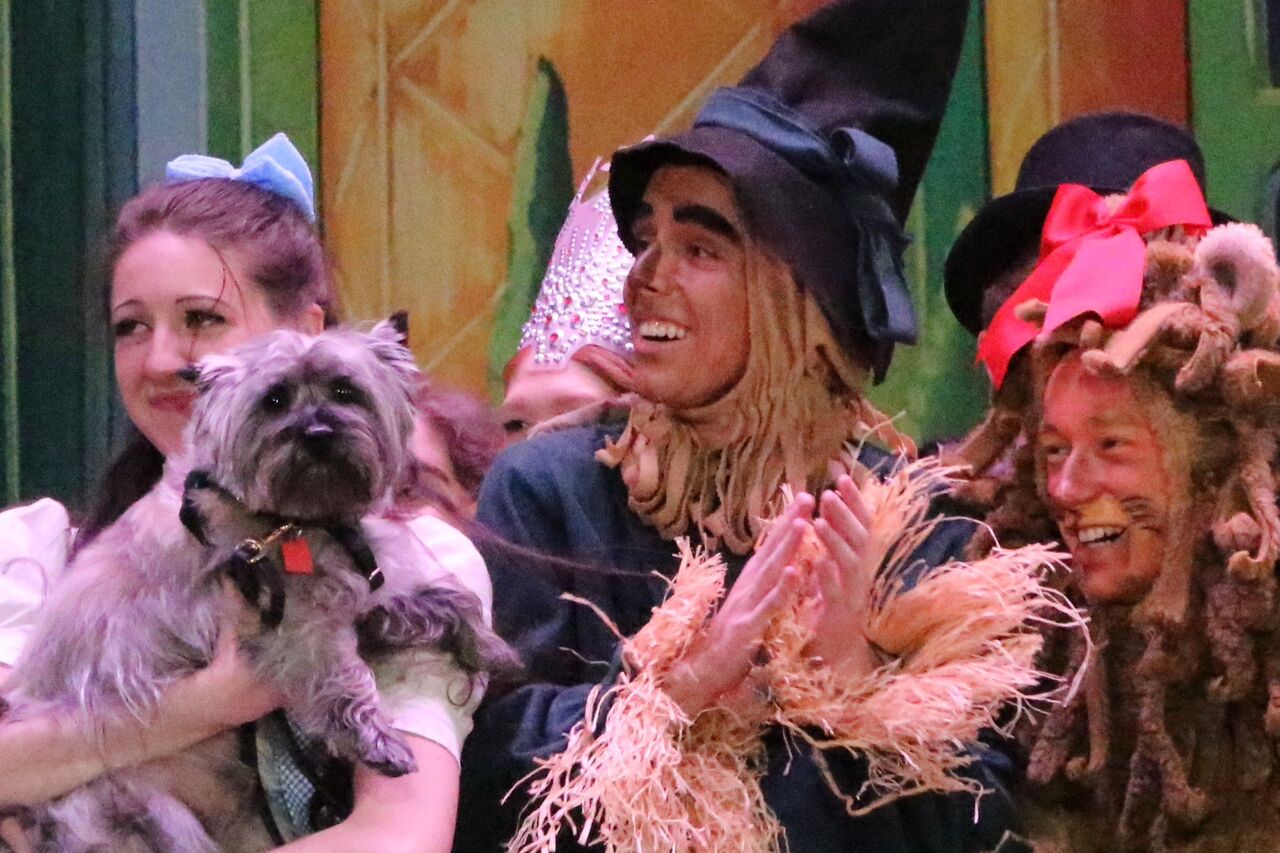 This past weekend, my friend Polly Rothstein’s dog Darwin made his theatrical debut as “Toto” in a local high school’s ambitious production of The Wizard of Oz. Darwin is a 20 month old Cairn Terrier, just slightly larger but in all other ways identical to “Terry”, the Cairn used in the 1939 film. Getting Darwin ready for the production has been the focus of Darwin’s training since he first got the invitation to perform from the show’s wonderful “Dorothy”, talented Kayla Fuhst. Here’s a summary of what we did to prepare him for the show.

Preparation.  A dog trainer friend called me a few months ago, looking for a dog to play "Toto".  We're introduced to Kayla and her family, and Darwin and Kayla hit it off immediately - so Darwin's got the job! Darwin’s owner and I are thrilled at the prospect of his debut. We are provided with a list of things that Darwin will need to be proficient with in his role as Toto. Surprisingly, our Toto will not have to spend any time being carried in a basket, nor even ride on a bike -­ but he will need to follow along in step with Dorothy et al as they make their way along their adventurous path. My job was to prepare Darwin for this role so that the on­ and off­stage atmosphere would not be stressful to him. We started this by inviting Kayla to visit Darwin in Polly’s home several times before rehearsals begin. These first meetings were such fun for both, and key to our goal in having a happy dog for the show.

First rehearsal. Polly and I make sure that Darwin is all set ­: pottied, water available (someone backstage has already painted a custom water bowl for him with “Toto” written on it). Since the costume designer has sewed an extra pocket on to Dorothy’s gingham dress for treats, it only takes a few reps of “Walk with me” to convince Darwin that Dorothy is his new best friend. He seems to take everything in stride:­ even the student orchestra playing close by, for which Polly and I had prepared him by playing recordings of music and applause as we trained him at her home. As he trots along with Dorothy to visit Professor Marvel in the first act, he sniffs each of the musicians’ heads while passing by. This, just as Dorothy says, “Oh, Toto, that's not polite! We haven't been asked yet.” The fourth wall has been broken! We’re off to a great start. 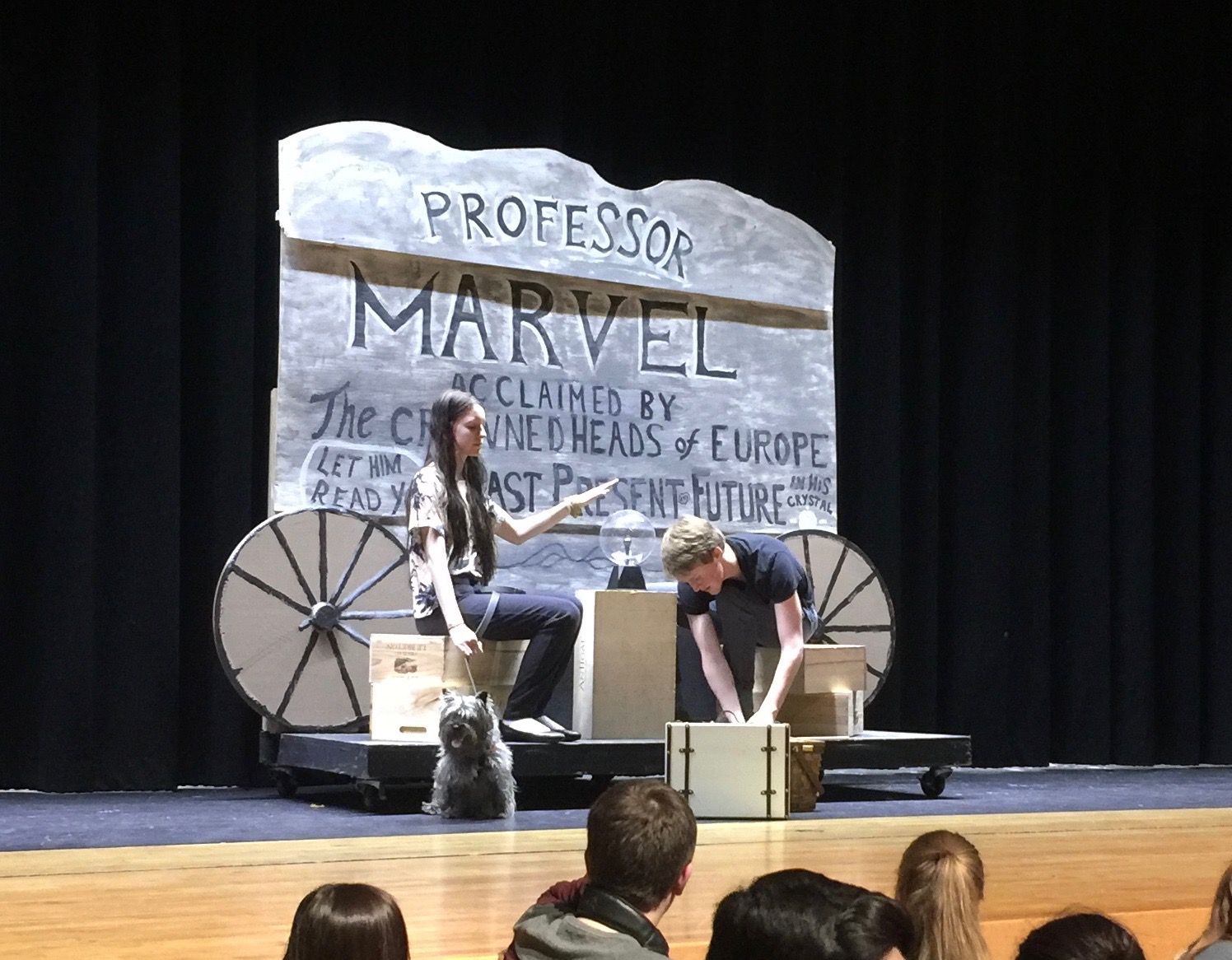 Rehearsal #1 with Kayla as Dorothy, “Toto”, and Professor Marvel. 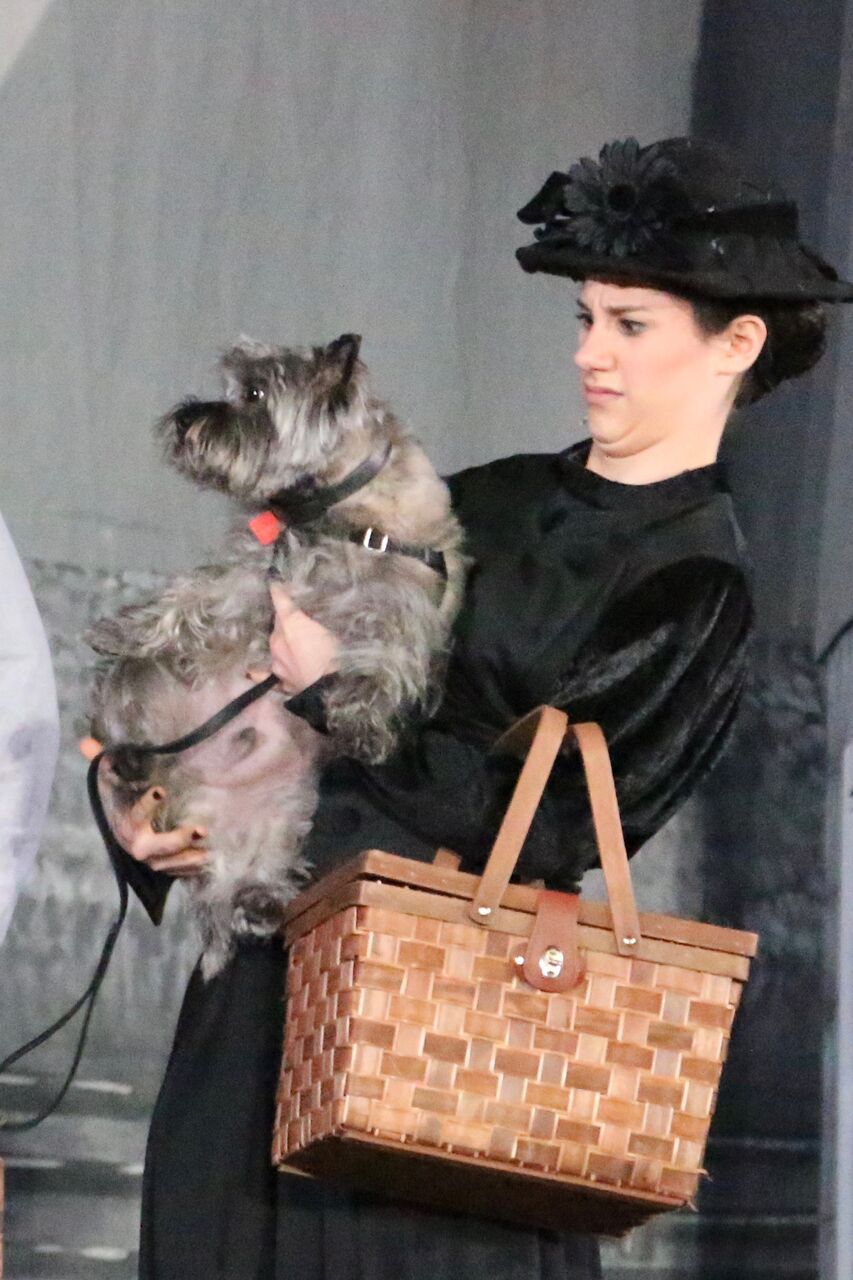 Polly and I needed to prepare Darwin for a potentially frustrating scenario : being tethered to a point on the set and left there while the cast performs a musical number. Many dogs restrained in this way begin to pace, bounce, and bark ­- but Darwin settles into a patient Sit even though his position is right next to the percussionist. Teaching him to “Go to Place” was an important facet of Darwin’s training in his Skills class ­and he remembered that bit of his training even in this brand new location.

The rehearsal stops and starts, and Darwin seems to be handling the whole thing very well ­until the Wicked Witch stomps suddenly around the corner of his fallen house, brandishing her broom over her head and screeching “I’ll get you, my pretty!” This is too much for “Toto” and he erupts at his adversary in a fit of alarm barks! Certainly this is method acting at its best, but the cast and I agree that it’s probably not wise to startle “Toto” in this way, and from then on he’s surreptitiously removed from the scene before the Witch begins her threatening rant.

Second rehearsal. I’m coaching not only Dorothy, but her friends the Scarecrow, the Tin Man, and the Cowardly Lion that the rehearsals are the best time to show “Toto” that being onstage with them, and being held by each of them from time to time, is very rewarding indeed. Each actor gets treats to reward “Toto” for hanging out with them, and he even enjoys being whisked away by a Flying Monkey! He has moments of worry and is given frequent breaks during these first rehearsals, but readily comes back to work, ears and tail held high, with all of the members of the cast ­- especially since they’re paying him so well! 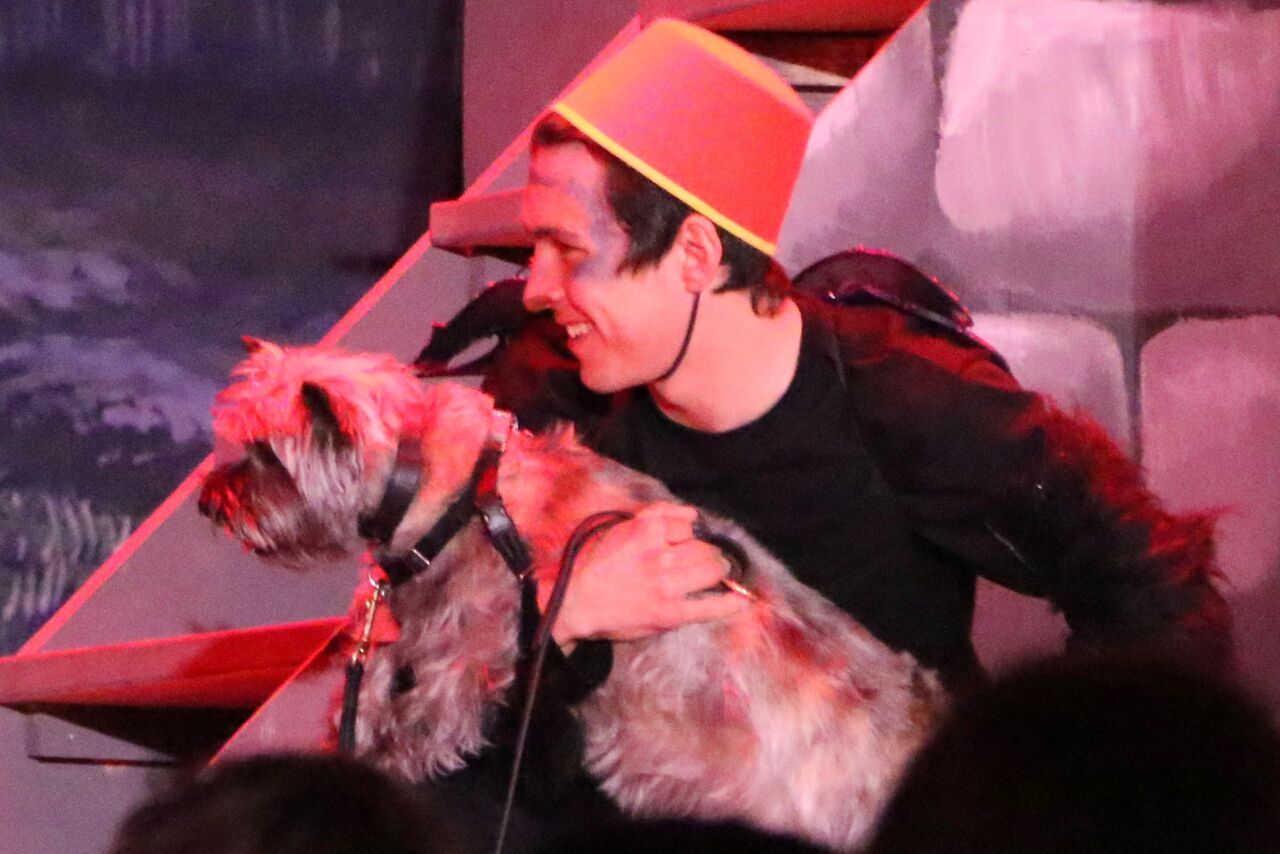 It’s such fun to see such talented actors put together what will clearly be a great production. Even at this early stage, it’s clear the show is full of talent. Towards the end of the rehearsal, as Dorothy prepares to leave Oz with the Wizard, she begins to say  farewell to each of her new friends. The actor playing the Tin Man starts to give Dorothy a hug goodbye during this last scene, and then freezes! The director booms to him from the auditorium: ­ “WHAT’S the PROBLEM ­- she’s leaving forever - you need to  ­ HUG HER!” Without breaking character, the poor Tin Man cries, “I can’t. My hands smell like dog treats!” 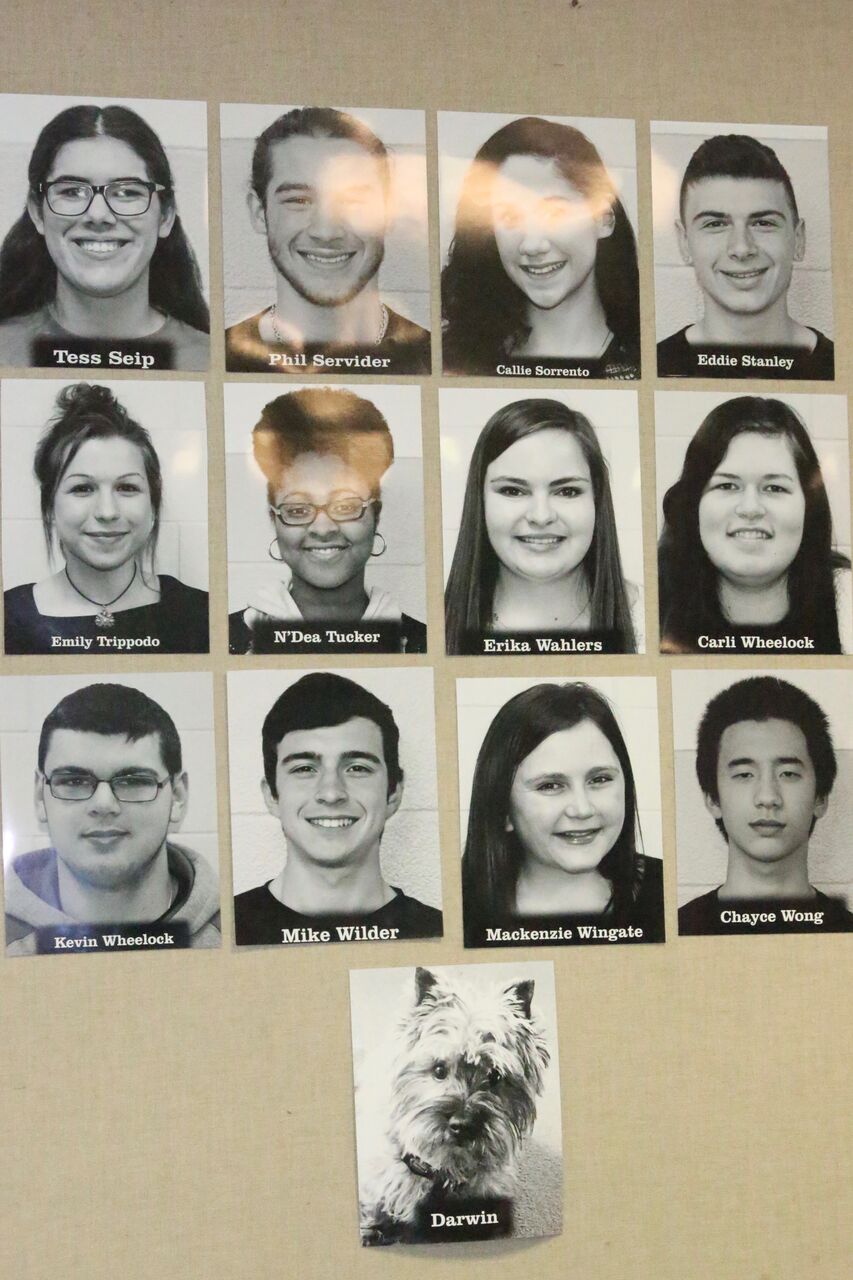 A reporter stops by the school for the final dress rehearsal, takes plenty of pictures of Toto and the cast, and we see them appear on the paper’s website the next day. "Toto is played by a perky little pooch named Darwin." reads the caption. 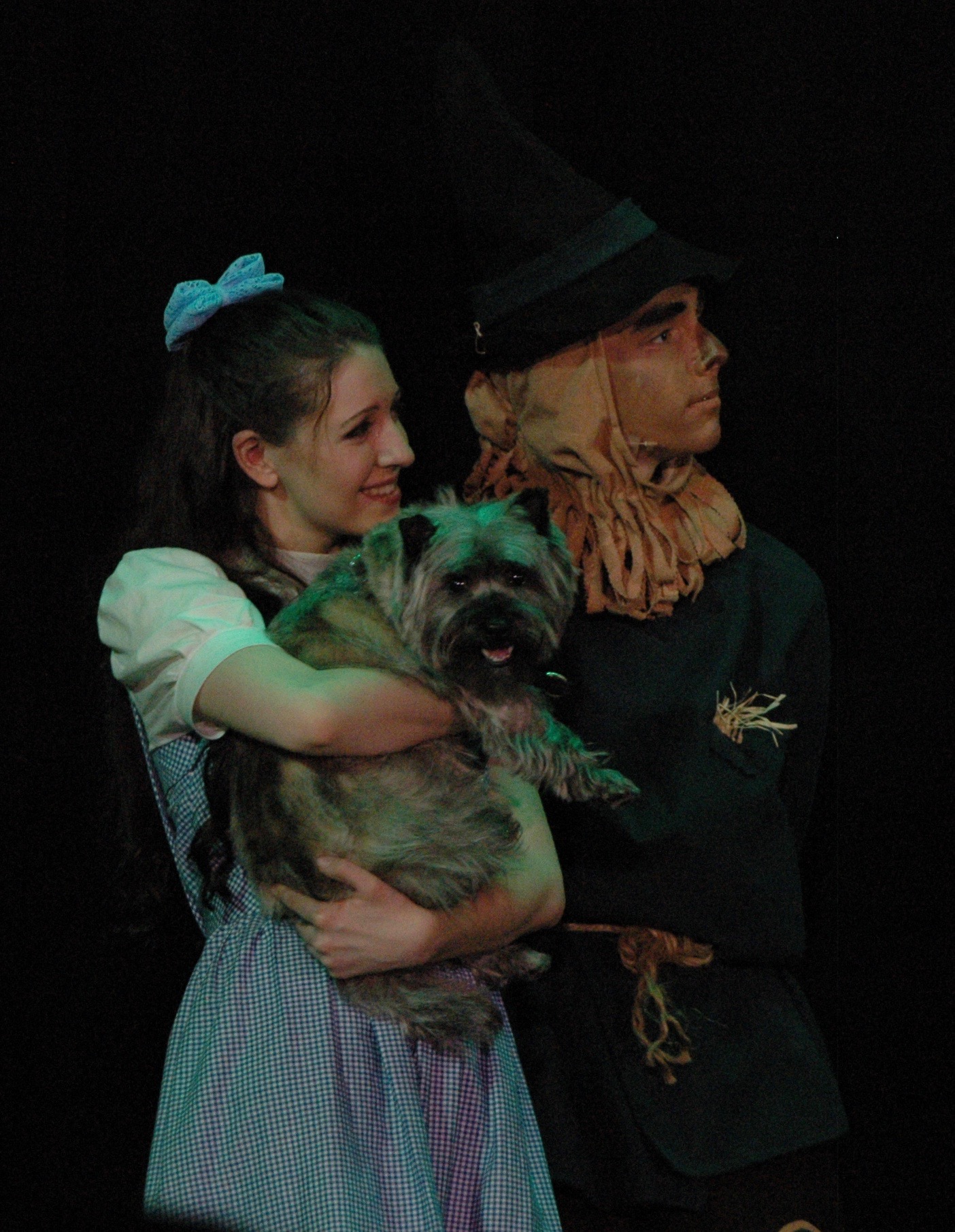 Darwin as “Toto” with Dorothy and the Scarecrow

Opening night. I have taken care to sit in a seat where Toto can’t see me from the stage. Though he’s been confident throughout the rehearsals, we’ve noticed that he will try to leave Dorothy to come to find me. I’m flattered by this but don’t want to add more stress to Toto’s experience ­- there’s quite enough happening already, what with the cyclone, the unruly mob of Munchkins, the heat and noise of the stage, and the electric atmosphere of the show. The audience reaction during his first appearance is huge, but once again, he isn’t stressed by all of the applause and appreciation as he steps on to the stage like a champion.

Darwin has been raised since puppyhood with nothing but positive experiences with new people and “strange” places and activities. He is a bold dog, with an outgoing personality and isn’t easily startled or scared by dancing Poppies, marching Winkies, or screeching Witches (though this last was certainly where the line was drawn). A timid dog who was easily worried by the bangs, crashes, and unexpected pratfalls of Scarecrows would have been miserable in this role. Darwin was perfectly happy throughout all 4 performances because he’s a confident dog, well socialized with people and always happy to be part of the fun. It’s wonderful to see him enjoy being part of the show, and to see the audience clap wildly for him in the final curtain call.

“Toto, too!” Glinda, Dorothy, Toto, the Scarecrow and the Lion

I’ve been working with Darwin and his owner Polly for over a year. In that time, Polly’s laid a great foundation for him with the training classes she’s taken as well as private tutoring. It is especially nice to see that Polly, who is disabled and must use a walker, never let that slow her training down. “My Physical Therapist and I both think dog training is a good thing to do. Anything to widen horizons or give people a new thing to master.” 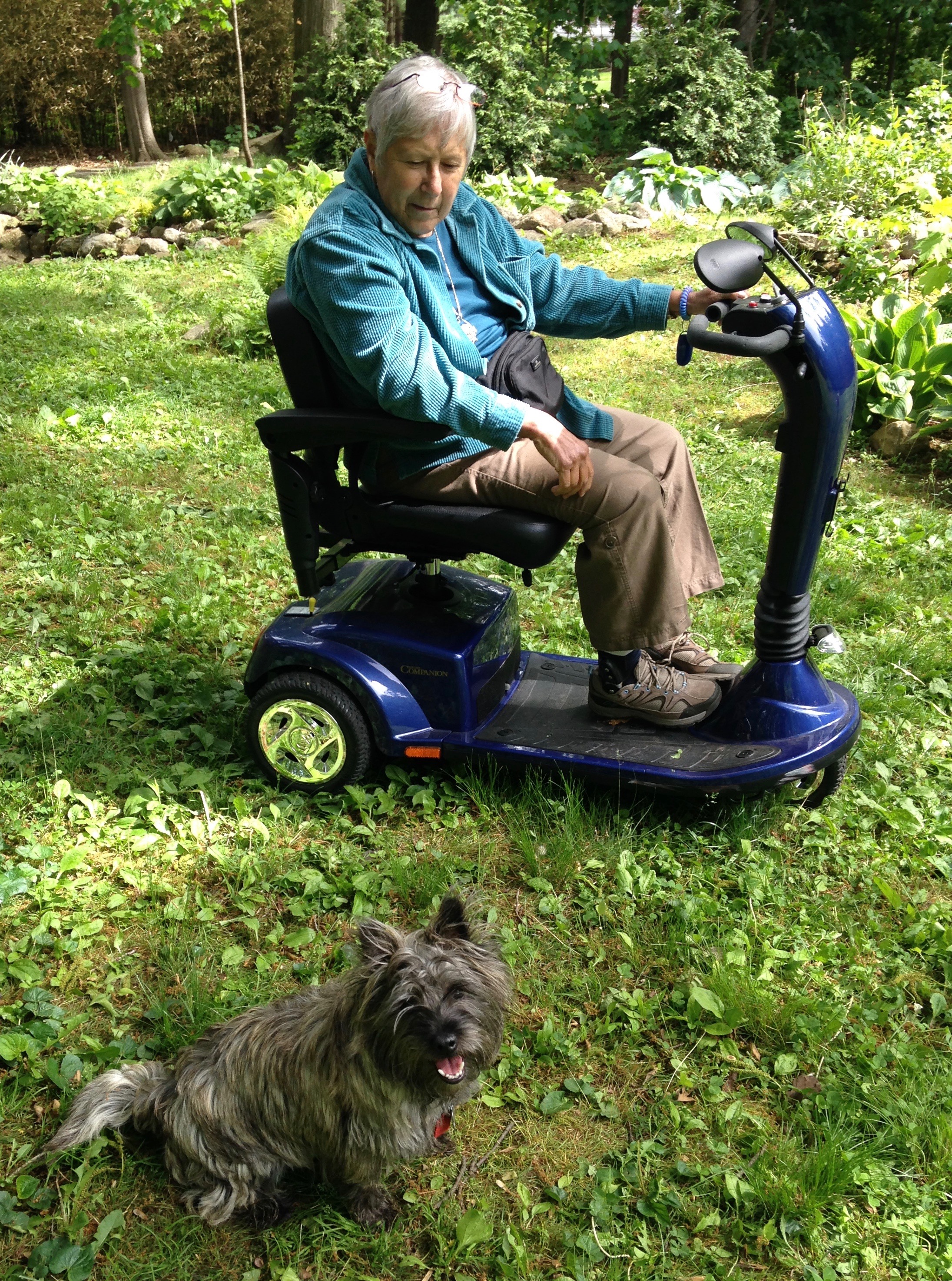 Misa Martin is a Certified Professional Dog Trainer. Years of attending agility seminars, workshops, seminars and camps with her first dog led to the beginning of her professional dog training career as a PetSmart Trainer in 2008. In addition to joining Port Chester Obedience Training Club's Family Manners program, Misa is a staff trainer at the Mount Vernon Humane Society, active with Pets Alive Westchester as a group class instructor and consultant for training and behavior issues, and a volunteer for the Walden Humane Society's education program. Misa owns Hudson Valley Dog Trainer, providing reward-based training to private clients. Through her knowledge, experience, and sense of humor, Misa encourages students to approach dog training as a team effort, where students learn as much from their dogs as dogs learn from their "parents," making training fun for humans and dogs alike! Misa can be reached at [email protected]
SaveSave SaveSave

Robert Fuhst
Thank you again for everything. The show was a huge success...Great article!!!! Way to go Toto...ah... I mean Darwin XXXOOO!!!
deena
So impressive! A Cairn is a perfect critter for this part, and I congratulate Darwin, his trainer, and Polly (!) for doing such a wonderful job!
Patricia Vetterman
Darwin was amazing in The Wizard of Oz! He was the talk of the town. Everyone could not believe how terrific and well behaved he was. He is sooooo adorable!
Information
Browse By Category
Browse By Price
Top Sellers
New Releases
Browse by Price
Quick View