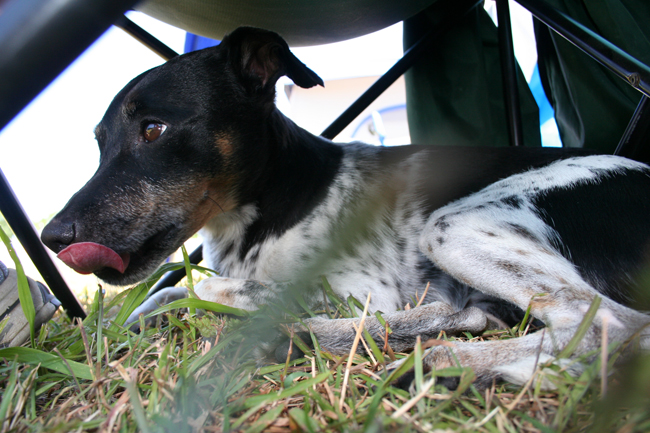 About motivating shy or shut down dogs.

If your dog needs a job to do, get to an Agility class! A bold, confident dog with high energy levels is the obvious candidate for Agility. But what about shy dogs who could use a boost in confidence? When approached the right way, Agility is a great activity to bring out that inner rock star in your partner!

My oldest dog, Flop, was nervous at times in new places. He is sound sensitive, and was very worried about "whoops!" mistakes that I made (and for good reason : when he was a pup, I attempted to train him as I carried a purse, thwacking him in the head several times with it as we practiced Loose Leash Walking. To this day, he flinches at sudden movements towards his head. Stupid me.) I wish I had caught on sooner to Flop's obvious dislike of my carelessness, and I wish I'd known more about how dogs look when they need to take a break - whether from training OR from being in an environment that they're worried about. (For detailed info about dog body language, I've linked some calming signal guides below to get you started.) This great info would have been of much help when I was starting out.

Where to begin when you see your dog worrying about new environments? The first rule is to teach your dog some basics in a place where he's confident. For both dog and handler, learning foundation behaviors in a safe, familiar place is always a good idea - you can take it on the road later, when you're proficient at these.

"But what should I teach?" For starters, I strongly recommend teaching a "nose touch" / "hand targeting" behavior. This simple behavior will be a big help in getting your dog's confidence up a purposely simple game that is easy to learn (your dog will love it because they will easily!) - it's easy to throw in a very short practice session any time you think of it. Also, playing games and doing tricks that a dog is familiar with and have gotten a ton of reinforcement for is a favorite strategy for many trainers. The Spin and Weave through my legs behaviors are easily taught using a lure - so your dog will catch on quickly! - and the end product involves motion and dynamic movement with you.

Tricks and simple behaviors such as the hand target are often referred to as relationship building games. Agility instructor Tracy Sklenar of Agility U is known for her skills in motivating dogs and their humans and teaches handlers to build their relationship with their dogs in fun and creative ways. She says: "Simple, fun behaviors that get the dog moving are key - especially if you are using food as a reward. This is a "must" whenever you train - whether at the warm-up jump of a trial or in your living room!"

If your dog is sound sensitive, being close to the BANG! of a teeter or the action of a wobble board may be too much. Is your dog hunching down, tucking her tail and blinking when other dogs in class are practicing with these things? Move away far enough from the practice area so that your dog isn't fearful of the noise - and use each BANG! as a Click! for your dog, and reward. This technique works very nicely with the structure of BAT training - specifically, the "Look at That" game and the "Engage / Disengage" game. Slowly decrease your distance when your dog is ready (remember those Canine Calming Signals? Look for those carefully to gauge your dog's comfort level!) Never force or compel your dog to move closer to things that are worrisome - this is a surefire way to convince your pup that he should in fact be cautious about the object that you're trying to pull him towards. 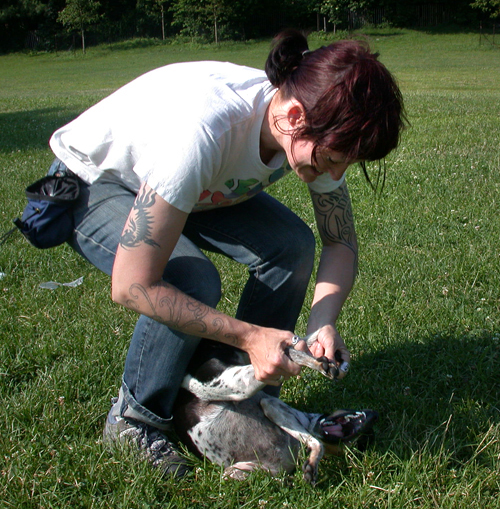 Believe it or not...Flop would flip into a somersault against my legs and I'd push him around on his back in the grass. We did this at many start lines at trials, to the astonishment of the ring crew and judge. This is how I knew he was really feeling good before a run.

Have you got a repertoire of behaviors that you can ask your dog to do that your dog clearly enjoys? Practice these often. You'll see that the effect of engaging your dog in this way will boost his confidence.

With every dog in agility, we need to get the optimal state of arousal before a run in training or trialing. This involves play and moving! I like to ask for a simple, fun behavior (like a hand touch or a trick or a bark) then run a few steps and reward. The reward must be something that the dog truly enjoys, so choose wisely!

And if the dog is really struggling to deal with the environment, the handler must step back from trying to train agility and focus on getting the dog happy to play in new environments! - Tracy Sklenar

In new places, I'd only ask Flop for behaviors that I was confident that he could do. If asking for a sit was too much for him, then I'd just say, "yes!" and reward for eye contact or hand targeting and - more importantly - moving around with me. At home, I'd practice this and then end a short training session with another learned REALLY FUN behavior : "Let's go get the cookies!" and a dash together over to the other end of the room for a big handful of treats. For many dogs, moving around while training is very helpful in reducing stress. Tracy reminded me more than once that I should not always be asking Flop to do doggie calculus but to concentrate on the fun, familiar games that helped his confidence to grow. 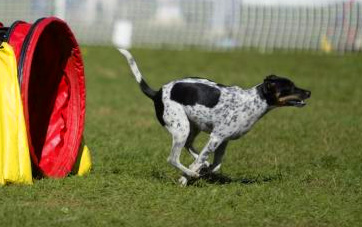 I tried to not get frantic or emotional about Flop's stressy behavior in classes or at agility trials. This was hard, as the perceived "peer pressure" I was feeling in those places often compelled me to feel rushed, and that spilled over into me asking my dog for too many things. One thing at a time, especially for a new pup. Remember that our body language and demeanor are so much more important than what's coming out of our mouths! Something to be mindful of as we show our partners that Agility is the best fun we can have with our dogs. 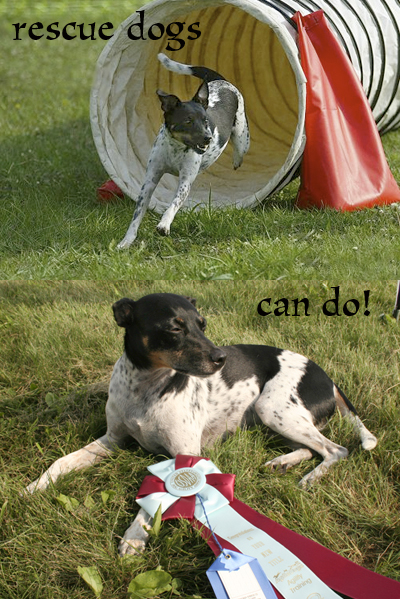 There are a lot of resources to look at on the topic of dog signals and body language. Here are a few:

Misa Martin is a Certified Professional Dog Trainer. Years of attending agility seminars, workshops, seminars and camps with her first dog led to the beginning of her professional dog training career as a PetSmart Trainer in 2008. In addition to joining Port Chester Obedience Training Club's Family Manners program, Misa is a staff trainer at the Mount Vernon Humane Society, active with Pets Alive Westchester as a group class instructor and consultant for training and behavior issues, and a volunteer for the Walden Humane Society's education program. Misa owns Hudson Valley Dog Trainer, providing reward-based training to private clients. Through her knowledge, experience, and sense of humor, Misa encourages students to approach dog training as a team effort, where students learn as much from their dogs as dogs learn from their "parents," making training fun for humans and dogs alike! Misa can be reached at [email protected]

Martha Fillinger
Do you know about VALOR (virtual agility league) for fearful and reactive dogs? This is more for dogs who still can't get out in public, but agility is fun for them and has helped them! Have their own Nationals. Going/gone international? Michele Godlevski is the founder out of NC. http://teamworksdogtraining.org/VirtualAgilityLeague/VALOR_home.html. Teamworks also has a Therapeutic Agility class for these dogs. Took the class twice with my fearful one!
Michele Godlevski
In 2011, I started an organization called the Virtual Agility League. It is specifically designed to give fearful and reactive dogs a chance to earn titles and ribbons...but by video...in the comfort of their own backyard or training facility. :-) My first agility dog was very fearful...and my second one very distracted...and my third one very dog-reactive (all rescue dogs). Somehow I made it through regular agility venues, but I created VALOR so that others could have a more user-friendly way to play agility. http://teamworksdogtraining.org/VirtualAgilityLeague/VALOR_home.html
Misa Martin
Thank you for mentioning VALOR, Martha and Michele - and thanks so much for your visit and comments! My Agility friend Jackie runs VALOR in NJ and has had trials at St Huberts' there. I plan on talking more about VALOR in a future blog post! - Misa
Information
Browse By Category
Browse By Price
Top Sellers
New Releases
Browse by Price
Quick View